Shoutlet 4.0 is the sexiest social CRM yet

Shoutlet, a social media management platform for medium to large-sized businesses, announced Tuesday morning the launch of Shoutlet 4.0, which brings a complete revamp of the platform’s UI as well as full YouTube and Twitter integration.

While previous versions of Shoutlet (especially the last most recent, Shoutlet 3.5) have always presented social CRM features in an easy-to-understand, elegant format, Shoutlet 4.0 is truly the best version yet. The company has done away with the modular-based aesthetic for a more streamlined setup.

From the Shoutlet “shout box,” clients can post to multiple Facebook or Twitter accounts, upload video to multiple YouTube accounts, upload podcasts and even schedule updates for later. It’s the power of multiple distribution methods all from a single, extremely potent Web page:

Users who have a lot of future updates scheduled can see them all listed in an on-site calendar.

On the actual social CRM management page, it’s just a couple clicks to switch between Facebook, Twitter and YouTube accounts. As visible in the screenshot below, it’s effortless to check up on your company’s tweets retweeted, mentions, direct messages and more. A tweet from another user can be labeled as a task that needs completing, like a customer complaint that needs responding to.

Beyond the newly updated platform, Shoutlet says it is also giving its customers the tools necessary to build HTML5 Web apps, perfect for viewing from mobile devices. Along with that, Weaver tells me Shoutlet intends on releasing apps for both the iPhone and iPad sometime in the next couple months that allow social CRM managers to quickly capture and upload content from the road, like a video at a tech conference.

And even though Facebook, Twitter and YouTube integration is nice, I had to press forward by asking Weaver the same question from last time we spoke: is location next?

“The new format [of Shoutlet 4.0] is very scalable,” he said,” so it would not be a stretch at all to add Foursquare. A couple of our large franchise companies are very interested in Foursquare, so we’re definitely looking at it for the road map.”

My question was a repeat and so was his answer. Back in December, he had told me that they were planning to roll out geo-location and mobile services sometime within six months to a year. Since the mobile offerings are already arriving, it’s not far-fetched to think the company will have location integrated by the end of 2011.

Shoutlet now has 50 employees and is continuing to grow its sales and development teams to keep up with demand from clients. The company adds about 15-30 new accounts each month. 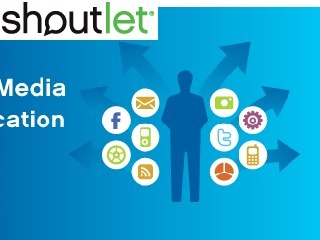 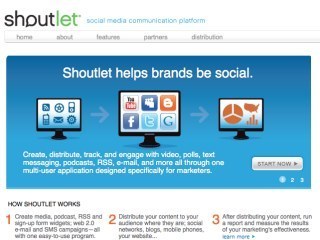 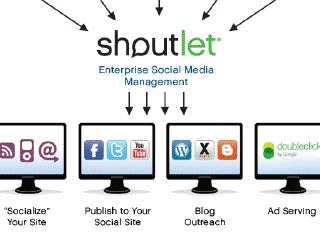