Most industries have figured out that one of the most effective marketing tools today is the Internet (particularly social media, but for now we'll just focus on the Internet as a whole). Business owners, entertainment execs, artists, educators, and more have figured out that the quickest and easiest way to reach people is via the Web. But one sector has been annoyingly slow to catch onto the Web phenomenon: politics. Obama's victory has been largely credited to his singular Web campaign, which spanned social media, email, and more, while John McCain joked that he didn't know how to check his email. So for future reference: tech-ignorance= fail; tech-savviness= win (and it's not like you have to be all that tech-savvy to check your email).

But there's a new reason for politicians to start figuring out how to untangle the intricacies of their inboxes. A new report released Thursday morning by the Pew Research Center's Internet and American Life Project found that in 2010, a full 73% of Internet users turned to the Internet to get information about candidates and other voting issues. This translates to 54% of the voting-age population. And while television still reigns supreme as most voters' primary source of campaign information (67% in 2010), 24% of adults polled said that the Internet was their main source of information--a threefold increase from 7% in 2002. By comparison, print newspapers are losing ground: 27% of all adults polled said they got most of their campaign news from newspapers in 2010, down from 34% in 2006.

CNN.com is the most popular online news source, with 22% of respondents naming the site as their preferred news source, followed by Yahoo.com and Google.com. The Fox News Channel has seen marked growth in its audience, with 26% of those polled saying that the conservative news channel is their main source of political news. Fox News also appears to have a strong Internet following, with 21% of Republican Web users saying they get most of their news from Fox News Online.

Of course, everybody wants their opinion validated, so most Internet users who align themselves with a specific party tend to gravitate towards those news sites that share their opinions. Republican Internet users largely stick with like-minded news sources, with 44% saying they get their news from sources that share their views, compared to 37% of Democrats and 25% of Independents. Interestingly, while the majority of both right- and left-leaning Web users tend to stick with news sources that demonstrate similar leanings, the majority of Independent voters gravitate toward sources that don't evince an opinion one way or the other.

But overall, "Republican voters and Tea Party supporters are just as likely to go online as Democrats or those who disagree with the Tea Parties," said Aaron Smith, Pew Senior Research Specialist and author of the report, in an email. "In general we find that—to the extent that people are interested and engaged with political issues—they are increasingly using online sources to get information, share their views and get involved, regardless of their political party or partisan affiliation." 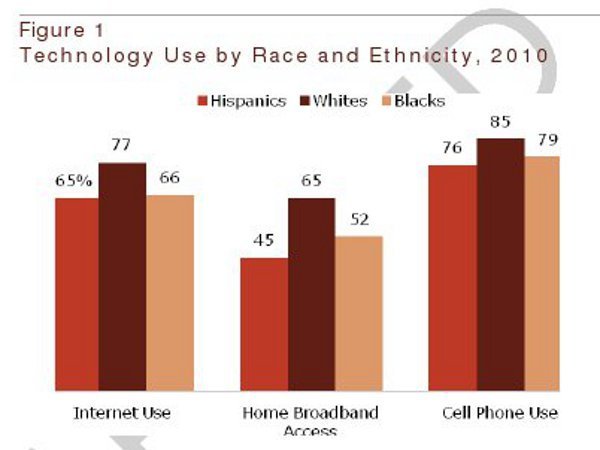 Pew report: Latinos and technology use