How YOU can keep Amazon in your state!

Amazon's game of musical states just axed another player. The e-retailer informed its Illinois affiliates that it would be pulling out of the state after Governor Pat Quinn signed into law a bill that would require online retailers working with affiliates in Illinois to collect sales taxes from Illinois consumers

“Illinois’ main street businesses are critical to ensuring our long-term economic stability, which is why they must be able to compete with every company doing business online in Illinois,” said Governor Quinn in a statement released March 10. “This law will put Illinois-based businesses on a level playing field, protect and create jobs and help us continue to grow in the global marketplace.”

It's hard to imagine that this will be good for Illinois, however, given the fact that Amazon has just severed its relationship with roughly 9000 affiliates in Illinois, who are no doubt likely to lose business and opt to simply pick up and move elsewhere. Those affiliates generated $611 million in advertising revenue in 2009 and tax revenue of $18 million. Now, with Amazon halting payments to those affiliates, the state of Illinois is likely to lose an estimated 25-30% of the tax revenue previously generated by those affiliates.

In a letter to its Illinois affiliates, Amazon explained the situation:

For well over a decade, the Amazon Associates Program has worked with thousands of Illinois residents. Unfortunately, a new state tax law signed by Governor Quinn compels us to terminate this program for Illinois-based participants. It specifically imposes the collection of taxes from consumers on sales by online retailers--including but not limited to those referred by Illinois-based affiliates like you--even if those retailers have no physical presence in the state.

We had opposed this new tax law because it is unconstitutional and counterproductive. It was supported by national retailing chains, most of which are based outside Illinois, that seek to harm the affiliate advertising programs of their competitors. Similar legislation in other states has led to job and income losses, and little, if any, new tax revenue. We deeply regret that its enactment forces this action.

As a result of the new law, contracts with all Illinois affiliates of the Amazon Associates Program will be terminated and those Illinois residents will no longer receive advertising fees for sales referred to Amazon.com, Endless.com, or SmallParts.com. Please be assured that all qualifying advertising fees earned prior to April 15, 2011 will be processed and paid in full in accordance with the regular payment schedule. Based on your account closure date of April 15, 2011, any final payments will be paid by July 1, 2011.

Similar laws have been enacted in Rhode Island, North Carolina, Colorado, and Hawaii, while California is currently considering taking legal action. If California follows other states who have implemented such legislation, Amazon could cut ties with over 1,000 California affiliates--which California's hard-hit economy could certainly do without. Recently, Amazon pulled out of Texas after it was slapped with a bill for $269 million in uncollected sales taxes.

So what is a concerned consumer to do when its favorite e-commerce site goes head-to-head with the local government? Never fear: you're not helpless. In fact, in your ignorance you could be breaking the law as we speak. Turns out, most states require consumers to fill out a form for a "use tax," which allows them to voluntarily pay their own sales taxes directly to the government. You probably won't be surprised to know that no one actually fills out this form.

BUT--if you feel the need to take some kind of action to keep Amazon in your state, you can start filling out this form, which you can download here. 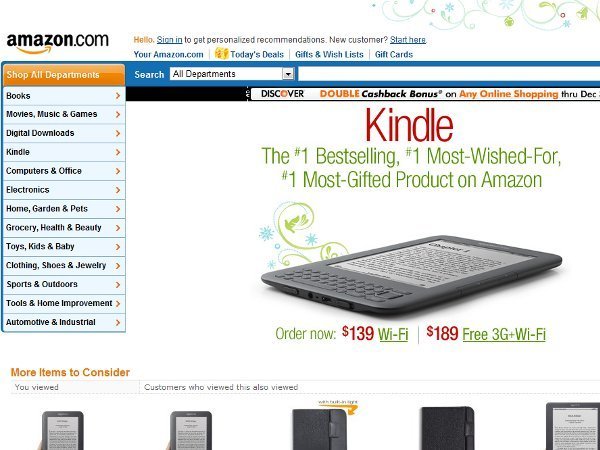 How much would Amazon lose in a DDoS attack?