Co-founder Dennis Crowley reminisces on the past two SXSW years, prepares for yet another

Just a day or two until all the technologically-obsessed descend on Austin, Texas for SXSW, the new favorite battleground for startup companies, one company with particular ties to the event has updated its app for the yearly check-in frenzy.

Foursquare, the location service that made a huge splash at SXSW 2009, has launched version 3.0 of both its iPhone and Android apps. The new app focuses on discovery, encouragement and loyalty.

In a long blog post on the Foursquare blog, CEO and founder Dennis Crowley outlines the inspiration behind version 3.0:

We’ve long wanted to build those things that can augment your experience of the real world – software that introduces you to new places and new experiences – and with the launch of foursquare 3.0 we’re getting a little closer to that vision.

One of the big ideas kicking around foursquare HQ these last few months has been the idea of “every check-in counts.” Regardless of whether you’re checking into the same ol’ coffee shop or some far-away beach, we want every check-in to add value to every foursquare user.

The first way in which every check-in counts can be found in the app’s new “Explore” tab. Encroaching a bit on Yelp territory here (and turning the tables a bit), Foursquare 3.0 enables users to search the nearby area for general things like “food” and “nightlife” or more specific things like “fireplaces” and “bratwurst.” The service will use everything it knows about you--places you and your friends have visited, your loyalty to certain places, categories and types you visit frequently, popularity with other users, and more--to offer a smart recommendation based on your search criterion.

Secondly, the Foursquare leaderboard has been rehauled to expand the app’s game mechanics, one of the biggest motivators for people to use the service in the first place. Now, a lot more actions, like discovering new places and visiting new cities, trigger points.

Finally--and this one is huge--Foursquare has expanded its loyalty program to give businesses the ability to reward just about anyone, not just the “Mayor.” Starting later this week, merchants will be be able to reward swarms, groups of friends, regulars, newbies or maybe just anyone who checks in.

Three big updates all rolled into one; I’d say it's more than worthy of extra attention at SXSW 2011.

BlackBerry phones will also be getting a Foursquare update this week, but it won’t yet include all the big changes coming to iPhone and Android with version 3.0. Symbian and Windows Phone 7 will be getting the updates eventually too, says Crowley, without offering any sort of timetable.

Before announcing Foursquare 3.0, Crowley walks through the brief but fascinating story of the app’s rise to prominence since its initial launch at SXSW 2009. Back then, it was just Crowley and fellow co-founder Naveen Selvadurai and a little location app that, by the end of the week, had managed to attract 5,000 users. A year later, the two returned to Texas with another 10 team members and left the event with 500,000 users. And 2010 was absolutely massive for Foursquare: the service is now approaching 7.5 million users, there were half a billion check-ins in the last year and the company's team is now 40 strong.

With a new app out on the market in time for SXSW 2011, Crowley’s Foursquare is not resting on its laurels. The battle to be the best and most-used location networking service rages on. 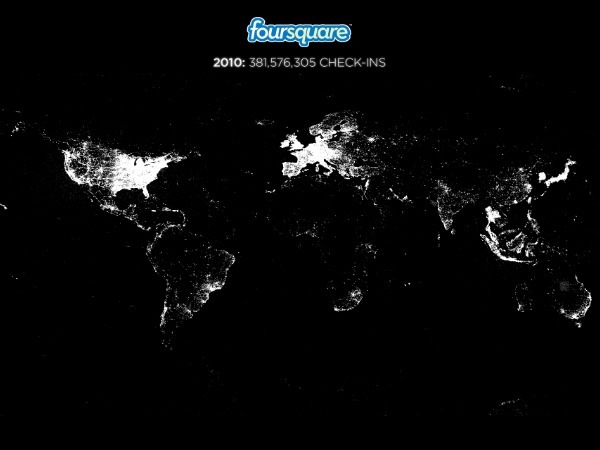