App made with Snaptu to launch on nine global carriers this week, five more soon

Smartphones may be becoming more ubiquitous by the minute, but hundreds of millions people around the world still use feature phones. You know, like flip phones and the phone pictured here.

Refusing to let its own mobile growth falter, Facebook announced this week that the social network’s mobile app will now be available on over 2,500 feature phones from Nokia, Sony Ericsson, LG and other manufacturers. Users of the new app will be able to access the site’s most popular features, like access to messages, events, pictures, the news feed and friends’ profiles.

Additionally, users will be able to synchronize contacts on Facebook with the phone’s address book.
The app was built in close cooperation with Snaptu, a developer of free mobile applications for Java-powered devices.
As with 0.facebook.com, a text-only Facebook launched for mobile devices in May 2010, the new app for feature phones is being made available to users completely free for the first 90 days after launch.

Currently supported carriers (and those launching soon) are listed below.

While it’s hard to say how many people (in the U.S. or globall) use feature phones, Nielsen published projections in March 2010 that said smartphones would outnumber feature phones in the U.S. market by the end of this year. More recently, in an analysis of mobile operating system market shares, Nielsen cited November data that said 45 percent of recent acquirers chose a smartphone over a feature phone.
Facebook says over 200 million active users access the site on mobile devices via more than 200 operators in 60 countries.
Launching today: Launching soon: 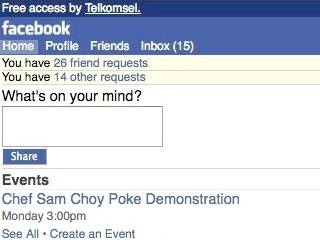