SoundCloud raises round from Wilson and Volpi

Online audio platform SoundCloud announced over the weekend that it has raised a new round of funding from Index Ventures and Union Square Ventures. Though the size of the investment has not been disclosed, reports say the round totaled $10 million.

SoundCloud last raised €2.5 million in April 2009 in a first round of funding led by Doughty Hanson Technology Ventures.

At its core, SoundCloud is a site where users can upload and share audio tracks.

“The media type that I spend the most time with on the web is audio. I listen to audio on the fixed and mobile web at least a couple hours a day and sometimes way more than that,” said Fred Wilson of Union Square Ventures, in an interview with SoundCloud. “And yet, audio is the one media type that doesn’t have an obvious platform for posting and sharing audio. I’ve been looking for that platform for years. And I think I’ve found it at SoundCloud.com.

Like on those other more well-known social media sites, uploading audio to SoundCloud is really simple. The site accepts a good range of formats, including AIFF, WAVE, FLAC, OGG, MP2, MP3, AAC, and uploads are usually complete, in my experience, in under five minutes. Embedding sounds on other Web pages is just as easy.

Non-paying users can upload up to two hours of audio, all in one track or distributed across many. Premium accounts cost anywhere from €29 per year for four hours of audio to €500 per year for unlimited storage. Besides the extra storage space, paying users also receive access to premium features like fancier widgets, better sharing tools and access to more in-depth statistics.

SoundCloud just launched its very first Android app in December, and there’s been an iPhone app out for a while. And SoundCloud was one of the few apps to launch in the new Mac App Store released last week.

Both Wilson and fellow investor Mike Volpi of Index Ventures talk about the newest addition to their portfolio on the SoundCloud blog, and we’ve embedded the audio below.

Thoughts on SoundCloud by fredwilson. Uploaded with SoundCloud Android 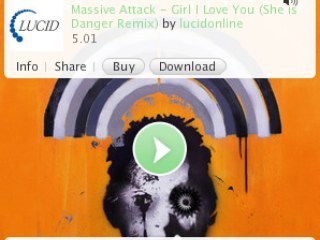 SoundCloud and HypeMachine partner up