Google VP Marissa Mayer took the stage at LeWeb Wednesday, where she talked about her new job as VP of consumer products at Google, her old job in search, and the new project she calls "contextual discovery."

What is contextual discovery?  The concept is a blend of search and social, essentially using an individual’s search patterns and social context to help him or her discover new information, such as a website or a book.

“It’s kind of search without search,” explained Mayer.  “So without you saying anything or typing anything, can we figure out, ‘oh, well you haven’t been to this place in Paris before and you were just doing “this,” so can we give you information about this place, what’s important, et cetera… So we’re playing around with new ways to get into social.”  Location and contextual discovery is related to search, said Mayer, so she has been able to use her eleven years’ experience to help develop the project.

Google is making a big investment in contextual discovery, said Mayer, who added that between 800 and 1,000 people report to her now, but when one tallies up the number of people in other branches of the company working on the project, several thousand people are involved.

“Think of it as location and context,” said Mayer.  The project will use an individual’s browser, for example, to see where he or she has been going on the Web and then use that information to make new recommendations to him or her.  How to deliver that information is a user interface problem, though, said Mayer, adding that Google is experimenting with including the information in a side panel of some sort.

This will obviously be mobile as well.  Mayer explained that one possibility that Google is exploring is whether a user can use his or her social graph and geographic location to bring up new recommendations and information.  For example, if a user goes into a restaurant, Google’s contextual discovery program will be able to pull up a “social menu,” or a menu of foods that the user’s friends prefer.

Google is also looking into getting into check-ins as well, possibly on Latitude or in Google Maps, somehow.

“Every acquisition is different,” said Mayer, who declined to comment specifically on any of the rumored acquisition attempts.  “The larger the company, the more details you have to consider about how this company would be integrated with Google, and do you integrate it?  We left Slide as an autonomous company.  They have their own brand, HR, PR… So what the actual strategy could be depends on the company, the leadership, and the overall product.”  With larger acquisitions in Google’s history, like AdMob, deals have had to be custom tailored to make the acquisition work.

When asked if Google could end up stagnating while it watches Facebook rise to the top, Mayer countered that Google is innovating, and that when you look at the Web, there are four main paths to take.  “There’s search, there’s video, there’s social, and there’s mobile, and I would really argue that Google has gotten three out of those four really, really right.  We’re just working on the fourth one,” said Mayer, indicating social.

When asked if Google is expecting any major acquisitions in the next six months, Mayer said that Google currently averages out at one acquisition per week.  She did say, however, that a few large, strategic acquisitions will be in the near future.

Mayer and a Google engineer used the remaining time onstage to demo the company’s new Nexus S phone.  The Nexus S is the first device created for Gingerbread and it is the fastest Android device yet, according to Dave, the Google engineer.

Mayer and Dave demoed the phone’s map drawing feature, which displays the user’s geographic location in 3D imagery, allowing for 360-degree turns, and, like a compass, stays anchored in place no matter which way the user turns the phone.  The phone also features offline data, which will allow users to fetch information without having to go online.  For example, if a user needs to get a map but is on a plane and can’t get online, he or she can pull up a fully downloaded map on his or her phone and can even explore in 3D, all without a Wi-Fi or 3G connection.

You can see more of Marissa Mayer in an interview with VatorNews here. 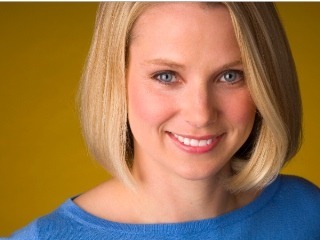