Beard explains how Facebook actually is in the music, gaming, and telecommunications spaces

Ethan Beard, Director of the Facebook developer network, sat down on stage Wednesday morning for an interview where he discussed some key issues within the Facebook platform, such as how the Facebook ecosystem works.  For starters, Facebook is becoming increasingly mobile.  It is fully integrated into most smartphones, and the new Windows Phone 7 even allows new users to create their WP7 account by connecting through their Facebook account.

"If I were to start a business today, I would go exclusively mobile," said Beard.

Indeed, Facebook's mobility has even led to Facebook Phone rumors, but Beard denied the existence of any such phantom phone.

But what Beard highlighted in the rumors of the Facebook Phone is the fact that phones like Windows Phone 7 is that those phones are Facebook phones.  Facebook is so heavily integrated into the phone's design that Facebook doesn't need to manufacture a phone of its own. This extends to other spaces as well, like gaming and music.

When asked if Facebook will get into the music space in the future, Beard answered, "We are in the music space because we build a platform on which anyone can build." Spotify, for example, integrated Facebook Connect earlier this year and has since seen quadruple the volume of traffic to its site. "So in many ways, because we are the platform, we are in the music space." Facebook, Beard explained, is interested in building out the social graph so that industries can develop on top of it. "We're not interested in moving everything over to Facebook, but in making the Web social. To that end, some 10,000 new sites a day are integrating Facebook connect and 250 million people use Facebook Connect each month.

Ultimately, this gives Facebook the ability to dip into a wide variety of different spaces without actually having to devote the time and resources necessary for developing a new branch or division, such as a gaming division or a music division. Someone else has already done that, so in essence, while developers are relying on Facebook to provide the platform on which they can build their apps, Facebook is, in turn, relying on app developers to provide the avenues for Facebook to branch out.

When questioned about Facebook's privacy issues, Beard maintained that Facebook takes privacy very seriously and has created its intricate default settings to give users more control over how much information they want to share. Beard went so far as to say that Facebook has the most comprehensive privacy controls and spends more time and resources on protecting its users' privacy than any other website on the Internet.

Beard will be playing with his band Coverflow at Vator Splash in February. 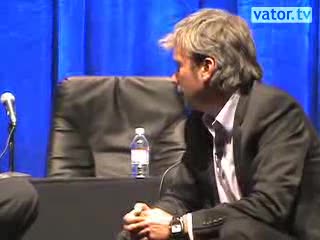