Facebook, Gowalla, SCVNGR and Yelp all offer special deals, but Foursquare goes beyond

Trying to get a piece of the action (and probably a little public exposure), location-based networks like Foursquare and Facebook Places partnered with a slew of retailers and brands to introduce creative location-based deals just for the biggest shopping day of the year.

Are the deals really worth it? I’d say yes, if you’re on Foursquare.

The most basic and best kind of deal is where the user receives a discount on their entire purchase merely for checking in. On Foursquare, this kind of deal is available for American Eagle (15% off), H&M (20% off), Hollister (20% off), JC Penney ($10 off $50 purchase), Payless Shoesource ($5 off $25 purchase), Piercing Pagoda (10% off), RadioShack (10% off), and Zales ($50 off $300 purchase). The RadioShack deal increases to 20% off for users who earn the “Holiday Hero” badge by following the company on Foursquare.

There are also a few similar deals with more conditions, like at the Gap, where you can receive 30% off any one item.

Not as good a deal (but maybe more fun): Sports Authority will randomly select 20 users who check in to Foursquare between 10 AM and 3PM EST and push the check-in to their Twitter accounts. The reward is big--a $500 gift card--but the number of people tweeting their check-ins will probably be even bigger.

No other location service has as many offerings as Foursquare.

Facebook Places offers the same deal for JC Penney that Foursquare has advertised.

Gowalla, another location-based social network, decided to forego deals and instead is running an all-day lottery for $50 Amazon.com gift codes hidden at various retail locations. Users who check in to the right mall or discount store have a chance to win one of these gift codes.

Promotions where only a select number of people win big is disappointing for the majority, but that’s kind of how Black Friday has always worked.

At Toys “R” Us, the first 3,000 people to check in on either Facebook, Foursquare or Yelp receive savings of 15% on a future purchase of $150 or more. Not only does the deal only reward the most dedicated, earliest shoppers, but it doesn’t reward them until a later date for pretty hefty purchase. (Since Toys “R” Us this year decided to start Black Friday at 9:30 PM on Thanksgiving, it’s pretty likely this promotion is already over.)

Finally, SCVNGR, a location network with a gaming twist, has partnered with Coca Cola to reward users who complete challenges with $100,000 in gift cards for Coke products.

Most of these latter deals seem more blatantly about promoting brands, stores, and the location service, because there is no immediate discount to be earned. When it comes to Black Friday check-in deals, Foursquare users definitely win. 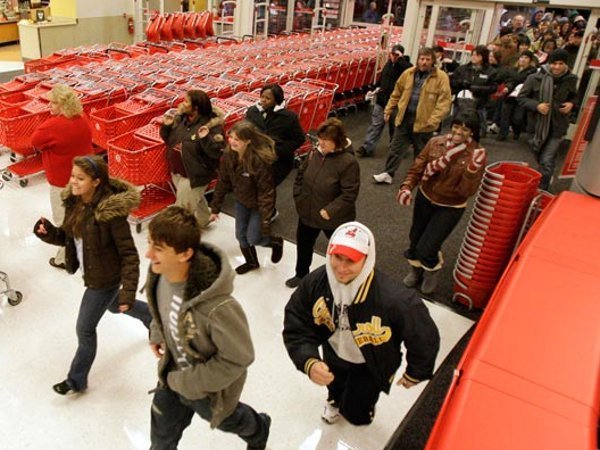