Groupon’s arch-nemesis, LivingSocial, announced Wednesday that it is going to Australia: the company has invested $5 million for a controlling majority stake in Jump On It, Australia’s leading group-deal site.  The Aussie social shopping company will be absorbed into LivingSocial’s branded Daily Deals, which makes LivingSocial’s offerings now accessible to shoppers in Australia, the U.S., Canada, Ireland, and the UK.

Launched in May of this year, Jump On It offers deals at a minimum of 50% off and features fun little incentives for shoppers like the chance to earn $10 in Jump On It credits for every friend they refer to the site.  With more than 550,000 Facebook friends, Jump On It, together with LivingSocial, is expected to reach more than 1.2 million Australian shoppers each day via email.

"We are very excited to join the LivingSocial team and be part of its launch in Australia," said Colin Fabig, CEO of Jump On It, in the company’s announcement. "Together we will lead the social shopping sector by offering consumers more and varied deals in their area, and by giving local merchants a one-stop shop for new customers across these two great websites."

Like other social shopping sites, Jump On It offers one deal per day, plus one bonus deal, and shoppers have 24 hours to “jump on it” in order to activate the coupon.  Offers range from dining, to spa treatments, to scuba diving (although anyone who’s ever watched the Discovery Channel will know that diving in Australia is a death wish).

"Having Jump On It as part of the team is an incredible opportunity for us to get started in Australia, and to offer our curated experiences to more consumers in more locations," said Eric Eichmann, COO of LivingSocial, in a prepared statement.

With 10 million subscribers in over 100 markets worldwide, LivingSocial currently brings in $1 million each day and is anticipating a revenue of more than $500 million in 2011.  LivingSocial offers deals of 50-70% off and allows shoppers to earn free deals by getting three or more friends to participate in a deal.

In October, LivingSocial acquired Urban Escapes to give shoppers a chance to participate in more activity-based deals.

LivingSocial’s most formidable competitor is, of course, Groupon, which has plans to expand to serve 300 cities by the end of the year.  Groupon has raised $173 million in funding, compared to LivingSocial’s $49 million. Until now, SocialLiving has trailed just behind Groupon in the number of unique monthly visitors, but recent statistics from Compete show that for the first time, LivingSocial is outpacing Groupon in unique monthlies: 11.2 million to 8.5 million, respectively.  Perhaps with more acquisitions like these, it can hold on to this momentum. 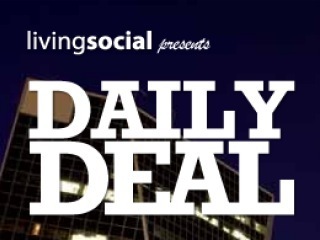