Update at 6:27 AM PST: Amazon announced at 9 AM EST that it has acquired Quidsi for $545 million.

Did you know you can buy dog food on Amazon.com?  You can also buy an inflatable mattress, towels, rock climbing shoes, and diapers.  The popular book-retailer has proven itself to be far more than just a book-retailer, offering everything from movies and music to household items and pet toys, all for less than what shoppers would traditionally pay for in a brick-and-mortar store.  In its latest move to expand its e-commerce footprint, Amazon is preparing to announce Monday its acquisition of Quidsi, the parent company of Diapers.com, for approximately $540 million, according to unnamed insiders.

The price represents nearly double Quidsi’s recent valuation of $300 million, which goes to show the lengths Amazon is willing to go to in order to secure its stronghold over the e-commerce world.  Amazon had approached Quidsi several times to discuss an acquisition, but Quidsi repeatedly refused, according to people close to the matter.  Quidsi’s Diapers.com had a comfortable niche among new parents and was seeing some $100 million in revenue.

The company’s success was largely attributable to 1) its highly automated shipping process, and 2) its fast and free delivery options.  When a customer places an order, vacuum-cleaner-like robots in Quidsi’s warehouse determine what size box to ship the order in and then cruise through the warehouse, filling the orders and somehow managing not to bump into one another.  The automated process has proven to be highly cost-efficient and allows the company to ship orders faster (customers can bank on having their items delivered to their doorstep within two days).

Launched in 2005, Quidsi’s pioneering site, Diapers.com, offers a wide array of baby care items, including car seats, cribs, toys, formula, shampoo, and more.  Repeatedly rebuffed, Amazon started playing dirty and recently began to offer Quidsi’s core item—diapers—for less than Quidsi’s price.  While a case of Pampers retails on Diapers.com for $45, the same case can be found on Amazon for $39.  That move forced Quidsi  into sales talks, despite the company’s claims that it was not looking for an exit.

To drive the nail into the coffin, Amazon recently introduced Amazon Mom, which offers a range of baby-related items and deals for parents and caregivers, including 30% off diapers and wipes and free two-day delivery (is anyone else startled by the gender implications here?).

Business Insider also found that the two e-commerce companies appeared to be in an advertising war on Google’s AdWords.  Typing in “diapers” brought up a Diapers.com ad, while typing in Diapers.com reportedly brought up an Amazon Mom ad.  This does not appear to be the case anymore, but facing this kind of pressure, it’s little wonder that Quidsi finally gave up.

“We believe this acquisition demonstrates that Amazon is open to using acquisitions to expand its footprint in key categories,” said Imran Khan, an analyst for JPMorgan, in a report on Sunday. 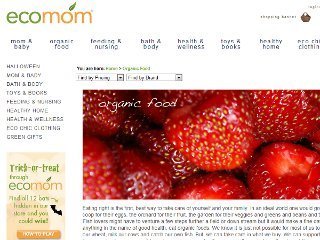