SideReel, an entertainment guide that allows Web users to track their favorite TV shows, announced Thursday the release of SideReel for Google TV, a version of the SideReel website that will now be viewable via Google TV.  Using their Google TV remote (which is actually a computer keyboard, not a ridiculously complicated remote as it might appear in pictures), users can access all of their tracked shows on their TV sets using the “My Shows” feature, and SideReel will also highlight its recommendations for top shows.

The “My Shows” option lets users organize their TV watching by allowing them to keep track of episodes they’ve already seen and alerting them when a new episode is available.

“SideReel's audience is a tech savvy bunch of early adopters, many of whom claim to watch Internet TV on their televisions through a variety of devices,” said SideReel CEO Roman Arzhintar, via email.  “They track their shows with us, watch their shows with us and - many of them - still watch them on TV.  Google TV + SideReel is a great way to combine the value proposition, and we expect our audience to be early adopters of Google TV.”

One prickly challenge stands in the way, though: networks aren’t so keen on the idea of Google TV offering a Web-based viewing option for their TV shows without a solid business model in place to compensate them for their content.  Many are also nervous about the possibility of TV shows getting sucked into the vortex of the internet and getting amassed with pirated content.

Arzhintar is not terribly worried.  “While price and network sensitivity to Google TV will likely slow its initial dominance in the living room, we expect GTV and our other ‘living room’ integrations under development to become a significant part of our business over the next few years.”

On that note, SideReel plans to expand to other TV-watching devices: “Our other ‘living room’ and mobile apps will be launching in the coming weeks.  Stay tuned,” said Arzhintar.

Founded in 2007, SideReel has raised $1.5 million in angel funding and recently surpassed one million visitors per day.  In a recent interview with Vator.tv’s Bambi Francisco, Roman Arzhintar noted that SideReel currently indexes 17,000 TV shows, which totals up to more than 500,000 episodes.  On average, users check back at SideReel once every three days, and a large number of them return to the site 40-50 times a month.

Other startups have risen and floundered in their efforts to group and index videos, and in his interview, Arzhintar noted that many of those companies were too focused on indexing every video and were focused on the long tail.  SideReel, on the other hand, differs in that it focuses more on curating and organizing videos for the user.

You can see more of Roman Arzhintar’s interview with Bambi here. 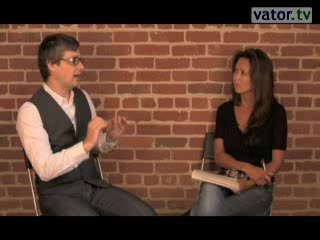