Honestly wants to be Yelp for professionals

Site formerly known as Unvarnished launches to public with $1.2 million seed funding round

Honestly, the community-contributed peer review site formerly known as Unvarnished, just launched to the public with a whole new name, look and feel.

The company also just announced a $1.2 million seed funding round led by First Round Capital, Charles River Ventures, and Ron Conway’s SV Angel, with participation from angel investors, like Joshua Schachter, Travis Kalanick, and Richard Chen. Josh Kopelman, the founder of Half.com and founding partner at First Round Capital, will take a board seat at Honestly. The new funding will be used to expand the company’s engineering team, which will likely have increased work with the site now being public.

Easily explained as a Yelp for professionals, Honestly lets anyone (aged 21 and over) register on the site via Facebook Connect. Once registered, any user can start reviewing their friends and colleagues, even if they don’t already have an account on the site. Later, should those friends decide to register on Honestly, they can claim their own review page.

And, for anyone concerned about logging in one day to find vile reviews attached to their name, Honestly has layers built in to prevent just that. Reviews with profanity are immediately blocked, any user who posts a series of negative reviews will fail a reputation test, and every single review that goes live must be hand-checked by an Honestly employee.

In fact, Honestly uses Facebook Connect exclusively because the site is obsessed with verifying that its users are real people. (LinkedIn integration could be on the way eventually.)

Peter Kazanjy, founder of Honestly, thinks the site will be perfect for professionals in any industry where a “portable reputation” is vital. Journalists, realtors, doctors, sales staff, business development, recruiters, investors--all these people sometimes find they need a way to show a client or customer that they are trustworthy. In the same way that feedback ratings on eBay tell you whether or not to trust a seller or buyer, reviews on Honestly will say the same for people.

Ever since the site launched as Unvarnished this past March, Honestly has attracted tons of professionals eager to review each other and get reviewed. While Kazanjy says he expect most early adopters to be people in the tech community like entrepreneurs and investors who are usually the most excited about this kind of technology, he told us that professionals in other fields have rapidly warmed up to the site. Doctors and realtors, for example, both rely heavily on personal feedback and therefore like the idea of Honestly.

Currently registered users on the site include David McClure of the Founder’s Fund and VP of search, platform, and mobile at LinkedIn.

Though he wouldn’t quote an exact figure, Kazanjy says Honestly already has registered users in the tens of thousands.

“We made the affirmative decision to forego user growth in order to ensure that the community started and stays professional,” he explained.

And that’s the focus of Honestly right now. Get people to post tons of information about their friends and colleagues, create an invaluable database, and the business model will come later. 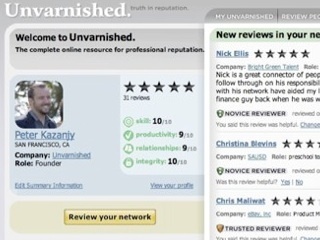 Unvarnished: your reputation is up for debate