The legend of the Facebook IPO is like a boomerang: it’s a story that always comes back.

Peter Thiel, an early investor in Facebook and one of its few sitting board members, on Monday silenced any lingering rumors or vague hopes that the social networking site would go public anytime soon. In fact, Thiel promises that Facebook will not IPO until late 2012 at the very earliest.

"It probably will IPO at some point. The lesson from Google seems to be that you don't go public until very late," said Thiel, who will be presenting his own lessons to entrepreneurs and investors at Vator Splash this Thursday evening.

Google went public in 2004, a month shy of six years after its founding, and it might be tedious to say how well the company’s stock performed.

Furthermore, Thiel, one of Silicon Valley’s most experienced venture and hedge fund investors, thinks Facebook could prove to be just as important if not more important to the Internet than Google.

“It’s the least overvalued of the major Internet companies in the world,” he said. “If it’s a choice between Google and Facebook you should be long Facebook.”

Obviously, investors are very eager and anxious about a Facebook IPO because the company’s approximate valuation swings somewhere in the tens of billions. In spite of that, Thiel still thinks Facebook is “relatively undervalued.”

Of course, as one of Facebook’s few sitting board members--along with CEO Mark Zuckerberg, Marc Andreessen, and Jim Breyer of Accel Partners--Thiel would be expected to value the social site more than most people. He was actually one of the site’s earliest investors, playing a major part in the $500,000 first round raised by the company in 2004, when it was still very much in its infancy.

Perhaps Thiel and his colleagues are waiting for the rest of the world to understand the true value of Facebook, an understanding that will only mature when Zuckerberg and his team can show off the site as not just a cool place for connecting with people but also as a full-fledged business. 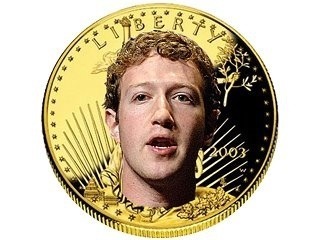