Why did Apple vaporize Lala?

When Apple bought cloud music service Lala in December, iTunes in the Cloud was expected to follow quickly. Last night, CNet published their best guess as to why that never happened—or rather, several disparate clues to possible explanations: Apple has the Lala team working on a video technology; Apple hasn’t reached licensing deals with the record labels; management disagreements led to the departure of one of the four Lala founders; Apple took a long time to tell the Lala team what they wanted… The upshot is that Apple has told the record labels in recent discussions that “if Apple offers any cloud-music features within the next few months, they will likely be "modest in scope" and not include the kind of functionality that Apple outlined in meetings with the labels.”

Hmm. Apple is not the type to mismanage their baby, iTunes. If Apple delays, it’s for a darn good reason.

Let me venture another possible explanation: Apple didn’t buy Lala to launch iTunes in the cloud. They could have developed the technology in-house when they were ready. Apple bought Lala to kill Lala.

Before May 31 of this year, Lala users could upload a song to the service and then stream it from anywhere to any device they owned. It was wildly popular.  It sold songs FOR 10 CENTS A PIECE. Apple’s are typically $1. That’s one hell of an undercut. And it had licensing deals with major record labels.

hat’s the rub. The record labels. Apple’s unbelievable earnings are due largely to the fat percentages it strongarms out of content producers. It takes healthy chunks from all app sales, rather famously in the case of major newspapers. When Apple effectively saved the music industry from piraty extinction in the late 90s, it levied a hefty protection fee that the labels soon came to resent. Lala represented negotiating leverage for them. It was the anti-iTunes.

If Apple wanted to continue exacting hefty fees, it had to maintain its dominance in music consumption, and Lala was the most formidable challenger. Yes, Spotify and Rhapsody are out there, but they offer subscription services, and most people still aren’t used to that model. We like to own our music, not pay recurring fees for it.

Don’t get me wrong: Apple will eventually launch an iTunes-in-the-cloud service, and it will be awesome, but company execs are in no rush. They will take as much time as is optimal to negotiate the best terms from the record labels (and TV and Hollywood studios, now that video is in the mix) as possible. It would have been nice to leave Lala in operation while they did this, but that would have cannibalized their negotiating power, and their iTunes revenue.

Lala is a music collection for the way you live -- online.
Take your music and fuse it with a massive licensed catalog to easily play, buy and share on the web.

With Lala you can:
* Play over 6 million songs for free – no ads or clutter.
* Play your existing music collection from any computer for free.
* Discover music through friends and experts.
* Buy new music starting at 10 cents 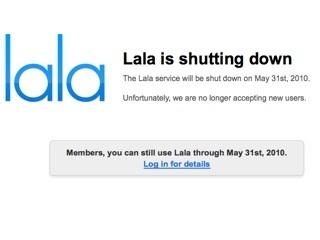 Lala: the music dies May 31