It's not about cost, it's about speed - rapid hypothesis testing and validated learning

"If we saved that money and figured out who the customer was, and then got to the chasm and then crossed it - husbanding our resources before then - we would have spent it more wisely," said 31-year-old Eric Ries, author of the blog, Startups Lessons Learned, and a guiding light in what's become a popular movement in Silicon Valley - going lean.

Eric's statement refers to an experience he had years ago at a virtual world startup, There.com, that raised $40 million, overspent and then failed. It's a common, though not-often-told, story in Silicon Valley, where the rags-to-riches-to-rags story plays out like an old re-run.

But given last year's economic downturn, coupled with a decline in technology costs, the idea of taking less money upfront and spending wisely to achieve a greater probability of success is becoming a new approach to building a startup that's taking root.

While there have been proponents of such methodologies, such as Steve Blank, serial entrepreneur, professor at Stanford and Berkeley, and author of The Four Steps to the Epiphany, as well as Donald Reinertsten, who authored The Principles of Product Development Flow, Eric is bringing more awareness to their teachings.

With his own entrepreneur war wounds, he's equipped to galvanize a following, and he's already uniting many who want to have a shot at success, and feel that the traditional "swing-for-the-fences" mentality to achieve it is either outdated, or out of their reach.

An almost cult-like gathering poured into Eric's conference last week, Startup Lessons Learned conference, in order to hear a bit of wisdom about this seemingly fresh view of the entrepreneurial word. Eric's words at the pulpit, encouraging folks to help spearhead this movement was akin to a preacher inspiring his congregation to go out and preach the good news.

The men and women onstage were elders leading this awakening.

In this second part of my four-part interview with Eric, we dive into a number of the principles behind this "lean startup" movement. I started with the question about why he's building a business around teaching startups how to essentially spend their money as they build their products. "Is it because the No. 1 reason startups fail is they overspend too quickly?" I asked.

"The leading cause of premature mortality for startups is they build the wrong product," Eric replied.

But startups can avoid realizing they've built the wrong product before running out of money by building faster, and learning faster. "Cash is not king," said Eric. "It's the number of iterations you have left."

Indeed, think of it this way, if you have $100,000 and burn $33,000 each month and release one product each month, you have three-months runway. If you had more releases, say one each week, you extend your runway by four times.

Each iteration of a product, provides startups with more opportunities to gauge demand and tweak often until they get it right.

"It's very rare for the initial idea to be the final idea," said Eric. The change in idea is what he calls, 'the pivot.' "How many pivots do you have?" he asked. "If it turns out some elements of your business model is wrong, how long will it take you to realize and react?"

The way to increase your pivots to get to this realization and react is a feedback called "build, measure, learn," which is the organizing principle behind the movement.

"How do you get your entire team to be behind this methodology of quick releases?" I asked.

"It’s really hard, especially if you hire people who’re used to traditional methodologies," he answered. "People get rewarded based on how well they do their job and not how well they contribute to the overall company."

So, is the ultimate metric how many people are adopting a product and paying for it? I asked.

"Each business model has different core assumptions that have to be validated," Eric responded. "With Facebook, its monetization strategy came later, but the addictive customer behavior was a clear indicator of product market fit."

This is where the concept "minimum viable product" comes in. What it means is producing the minimum amount of work required to test "one" of the fundamental assumptions of the business plan.

So, what percent of startups succeed with this approach?

"We're way too early [to know]," he said. "First this is new. I did my first public speech about one year ago… I was afraid to talk about this in public."

But changing the way you work doesn't guarantee success, he warned. At the end of the day, Eric advised, "if you're in entrepreneurship to make money, please do something else." 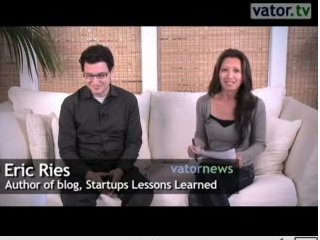