Katie Stanton, a former Google and Yahoo employee, had been in her new job at the U.S. State Department for less than a week when, on January 12th, 2010, she learned of the earthquake that had ravaged Haiti that afternoon.

Stanton wasted little time. Within 48 hours, she persuaded Haiti’s mobile operators to assign a short-code emergency number — 4636 — so anyone in Haiti could text in their needs. Despite massive devastation, most of Haiti's cell tower infrastructure had remained intact, providing a possible lifeline for victims.

“We saw on television these stories of people trapped under the buildings using a mobile phone to tell people where they were, and they were saved,” Stanton said in an interview earlier this month. “So we thought, we should have this for everybody and we set this up.”

Within four days, two relief groups based in Africa, Ushahidi and Energy for Opportunity, created a system to crowdsource the translation of the text messages and map the locations of the senders, facilitating a timely response and enabling relief organizations to find trends in the aggregated data.

Emergency support company InSTEDD worked with Thompson Reuters to broadcast the short-code to as many Haitians as possible. Text messages, mostly written in Creole and French, began pouring in from all over the affected region.

As the volume of urgent messages snowballed, so did the need for a more robust workflow platform. Samasource, which outsources jobs to marginalized people living in poverty, and CrowdFlower, an ondemand labor service for mundane tasks that launched at TC 50 last year, began pulling in feeds of the emergency SMS messages, and sending them to Creole and French speakers around the world for translation into English.

“Harnessing thousands of volunteers would normally create a logistical nightmare, but it is specifically this kind of amorphous virtual labor force that the CrowdFlower platform was built to accommodate,” said Lukas Biewald, CEO of CrowdFlower.

Biewald told me that the experience was quite a shocker for his employees, who were used to dealing with the less-dire enterprise sector. “It was immediately clear that people were using this system to send absolutely urgent and heartbreaking messages,” He related in a blog post last month where he provided a few examples:

I am in the town of Jeremie in the Grand'Anse Department. My boyfriend died, I'm 8 months pregnant, I don't have any money. Whatever you can do for me will be a deliverance.

My name is J. W. my brother is working in Unicef and I live in Carfour 11 Alentyerye I have 2 people that is still alive under the building still ! Send Help!

CrowdFlower ended up collecting over 16,000 judgments/translations for the effort job. At peak volume in one hour over 5,000 SMS messages were processed.

Overall, Mission 4636, as the multi-organizational text message project came to be called, proved a central component of the relief effort. Craig Clark of the Marine Corps commented:

I wish I had time to document to you every example, but there are too many and our operation is moving too fast ... I say with confidence that there are 100s of these kinds of [success] stories. The Marine Corps is using your project every second of the day to get aid and assistance to the people that need it most.

• Importance of information sharing: publishing an RSS feed of the translated SMS that was accessible to many different groups was key in allowing aid agencies to access particular categories of messages most important to their work. Ushahidi's maps of the reported incidents and the requests for help made an important delineation of the overall trends separate from the individual needs. Helping streamline the actions and information exchange among more than a dozen agencies was a much-needed contribution to a typically fragmented disaster relief ecosystem.

• The role of crowdsourcing in future efforts: it is clear that new technology and cross-platform collaboration stand to make significant contributions to future relief efforts. Mobile phones will enable an iterative data collection and data exchange process to assist relief agencies in future emergency situations. Crowdsourced data processing has a role within these relief efforts and will be a highly flexible, highly responsive tool for any and all actors.

I have to hand it to Biewald for throwing his team into a situation that was probably more than they had bargained for.  Startup life can be a crazy, but it's a whole different ballgame when platform speed and functionality become a matter of life and death. 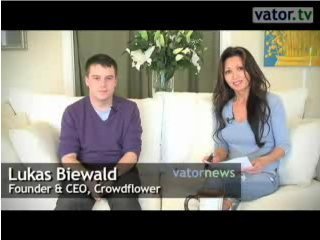 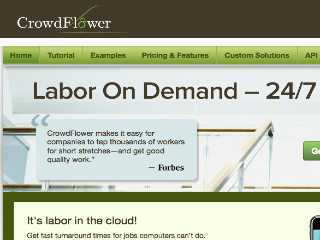