MySpace relaunch coming in the fall

New site will have greater emphasis on games, music and will tap China and Africa.

MySpace is planning a relaunch in the fall. According to a report in Australia’s Syndey Morning Herald, the goal is to win back users from Facebook.

The report quotes the co-presidents, but never do they indicate that combatting Facebook is the goal. MySpace basically lost that game. It has flailed amid executive shuffles and dwindling significance since being acquired by News Corp in 2005. Facebook, which proved better at keeping out seedy spammers and maintaining high personal relevance, has grown to 400 million users by its own account, about four times the amount of MySpace’s self-reported 110 million active users.

Beating Facebook at what has become its own game is impossible. MySpace has slowly redefined itself as a place for music, and it makes sense to continue playing to its strength. It looks like the editors thought that throwing Facebook in the headline would be better for views (caught my attention), but reading between the lines, I don't think the company itself is positioning its relaunch as a way to regain the social networking champion title.

However, the company is hoping to win back old users. Mike Jones, who was appointed co-president along with Jason Hirschhorn in February, thinks he can convince people to return. "I know that when that relaunch comes I've got a great product. I've got a global audience that at one point used MySpace ... I think I can make the old new again for them," Jones told the Australian Associated Press (AAP) in Sydney on Thursday.

News Corp chief Rupert Murdoch recently took time off of his war against Google to catch up on the MySpace plans. Jones says Murdoch has maintained a high interest in the site. “We spent time with him, he was in the offices last week, we walked him through our full 2010/2011 product road map, including visuals, and it wasn't a light walk-through."

I’ve pinged MySpace to see how directly they plan on taking on Facebook, or if the idea is to emphasize the music niche even more. 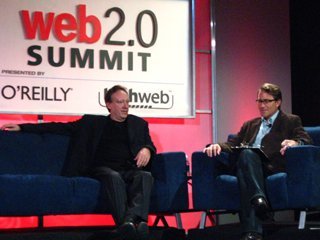 Should MySpace.com become music only?