Chopra took the stage this morning at the Global Technology Symposium for a fireside chat, with Hummer Winblad Managing Director Mark Gorenberg representing the Valley.

Electronic Medical Records
The government has dedicated $20 billion of Recovery Act funds to achieving adoption of medical records. The draft rules established that “a patient is entitled to an electronic company of their medical records within 48 hours of request,” but Chopra says the government has no idea how to get there—it’s expecting that to come from the private sector.

Defense Apps
The government is also seeking to fund solutions from potentially small startups to help the war effort:

“We have a $50 million solicitation right now with the defense department under DARPA called Transformative Apps. The idea is the Defense Department runs a private could called RACE and we want all entrepreneurial companies to work with us to find a way to bring their platforms onto RACE so that the war pilot can now load from any one of 20, Afghan to English translation tools so that there’s not one government bureaucrat in Washington running R&D for like the “perfect” translation software. Because of this transformative apps model, let there be an ecosystem of apps and let the war fighter choose which one can help them achieve their goals wherever they are. $50 million solicitation, on the Street right now.”

Health Games
At the recent Games Developers Conference in San Francisco, Chopra announced a competition for game developers to create apps that encourage healthy living among kids, using the federal government’s data on health and nutrition.

We could have done some complicated thing and taken a messy approach, or we could simply say, hey, we have data on every kind of food you eat at the department of agriculture. We just have it. Let’s release it.” […] rather than assume that everyone in the world is going to visit the Foodipedia website, we’ll release the data and the code and allow entrepreneurs to take it to the last mile. Let there be video games and parental apps to take this same raw data and match it up to whatever entrepreneurial energy you have and build solutions that will get this policy going. A “whopping” $40,000 investment is the prize that we’re going to put forward to help spur games.”

Chopra mentioned he had to work within a tight budget. 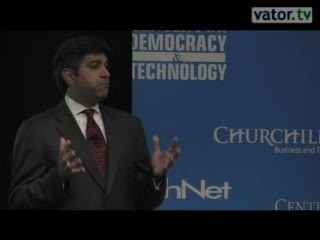