If you're living in the San Francisco Bay Area, own an iPhone 3GS, and are a BART commuter, you're in for a pretty neat update.  BART and iPhone developer Junaio, have teamed up to bring an augmented reality layer to the Bay Area's rapid transit system.

How's it work?  Well if you're familiar with the concept of augmented reality on smartphones, basically, using your phone's camera, you point it around and information pops up about the things around you.  In this case, if you turn on the BART layer, you can find information about where the nearest BART station is and even find out the list of estimated arrival times for the next several trains.

On top of that, Junaio said for example, a rider coming out of the Montgomery BART Station in San Francisco could see recommendations left by friends for restaurants or shops to try that are nearby the station.  So on top of simply pointing your phone and seeing info, users can also leave info or digital tags around the world around them, similar to Tonchidot's Sekai Camera application.

(image above, BART layer on Junaio) This is all possible because BART's been pretty good about keeping up with the wonders of technology.  The transit system has an API in which developers can access and make use of for applications like these.  More than two dozen apps, including other iPhone apps, have been built because of the data BART has made available.

Junaio plans to launch its 2.0 platform at SXSW in Austin, Texas this week.  This BART layer will be the first of many to be available on the Junaio platform.  If you're on Android, not to worry - Junaio said it has a version of its platform in development and on the way.  You can download the Junaio app for free here. (below is a video of the app in action)

metaio is a pioneer in developing and marketing Augmented Reality software products for systems driven by visual interaction in both real and virtual worlds, which allows users to place 3D animations directly into live video streams and supports the seamless integration of images from the external user environment at real-time.

metiao is launching the first commercial Interactive 3D Books at the Frankfurt Book Fair 15th - 19th October in Germany. The publishers Knowledge Media International (Bertelsmann) and arsEdition will each show you one of their books enhanced with Augmented Reality. For more information, please visit the following website. 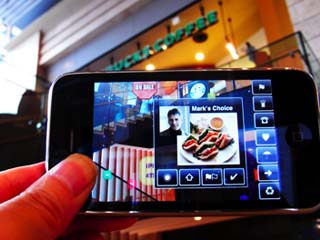