Google is famous for not advertising. CEO Eric Schmidt called the practice “the last bastion of unaccountable spending in corporate America” in 2006, and the company has generally let products speak for themselves. But that didn’t stop the search giant from shelling out $2-3 million for a spot in the Superbowl this year. “Hell has indeed frozen over” as Schmidt tweeted on Feb 6.

The ad aired during the third quarter, called Parisian Love, tells the story of a romance, from a trip to study abroad in Paris to a couple’s first child, through search queries typed into Google’s homepage query field.

Rumors that Google might do the unthinkable surfaced on Saturday when John Batelle reported the Parisian Love spot might run in the third quarter. Shortly after that post, Eric Schmidt let the cat out of the bag with this tweet:

"Can't wait to watch the Superbowl tomorrow. Be sure to watch the ads in the 3rd quarter (someone said "Hell has indeed frozen over.")"

To Google’s credit, the spot is different from traditional Superbowl advertising in two ways. First, it’s been up on Youtube for three months already. Normally, advertisers covetously hide their Superbowl ads from public view prior to the game to maximize the novelty wow-factor. Google, as the de facto spokesman for the Internet, kept a smug tone of superiority by sharing the spot with the TV world only after the cool kids on the Net have feasted first. Schmidt says the goal was not so much the company’s own interest as an act of charity to the public: “we liked this video so much, and it's had such a positive reaction on YouTube, that we decided to share it with a wider audience,” the CEO wrote in a blog post yesterday evening. Of course, the ad is as much about making money as the rest of the spots aired during the game yesterday; in particular, the company has to fight back as Bing gains market share. Still the crowd-sourced approach to selection helped Google maintain a little bit of it's anti-traditional advertising mojo.

The spot also raised the tone of the ads in the worst year for Superbowl marketing creativity in recent memory. I didn’t even catch the narrative woven throughout the spot when I first viewed the ad yesterday, my mind numbed by too many Doritos tackles and screaming chickens. It was a touch of sophistication in a year when ad agencies relied almost solely on busty women and shock humor. If it takes Google breaking its no-advertising policy to keep viewer's brains from turning to mush, then I'm all for it.

This is not Google’s first foray into advertising—billboards have touted its enterprise suite; links to its browser, Chrome, have shown up on its web pages; and display ads for the Nexus One appeared on its own homepage—but this is the first time Google has advertised it’s core product, search, in a paid TV advertisement. 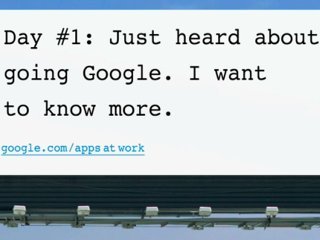