As services like Pandora make the purchase of online music less appealing, Apple is taking steps to broaden its music offering.

Apple on Friday acquired Lala, a music streaming service, for an undisclosed amount, according to published reports.

The move is a smart one for Apple for multiple reasons.

First of all, music piracy is not going away.  Any album these days can be downloaded illegally via Bitorrent, either the day it comes out or weeks before.

Apple's current iTunes model sells albums at prices a little less expensive than actually going out and buying the CD, usually around $9.99 for album.  iTunes also let's users buy individual songs off these more popular albums anywhere from 69 cents to $1.29 a pop.  If you really think about it, how much different is it to buy an album off of iTunes than it is to buy a CD...not much.

On the other hand, music streaming and subscription based services are quickly on the rise. Music recommendation site Pandora attracts some 10 million monthly unique visitors. The service gives users access to unlimited music for free. The only cost is having to listen to a few audio ads.

Here in the US we have Rhapsody, a subscription-based music service that lets you pretty much listen an unlimited amount of music from about 6 million albums for $12.99, about the price of one album.  At the same time, Rhapsody also has a new feature called Rhapsody To Go which lets users listen to any of these 6 million songs on their portable devices.  And guess what, there's an App for that.  A couple months ago, Rhapsody was approved on the iPhone letting users stream music right to their device, eliminating the need to actually download mp3's all together.  Spotify has a similar service but isn't available in the US yet.

When you take a look at Lala, you'll notice a sort of middle ground.  Lala will let any user listen to a song on its site once, for free.  After that, customers can buy the track for 10 cents, but it lives on the Web and they can't download it, they can only here it on their computers when they are online.  Lala has a library of about 8 million songs and deals with major industry players including EMI Music, Warner Music, Sony BMG Music Entertainment and Universal Music Group.  Lala is also now providing previewable music via Google's music search feature.

Now that  Apple has purchased Lala, we should expect to see some sort of a subscription based offering from iTunes, where users buy songs at less expensive prices, but they live in the cloud.  Once they cancel that subscription, they wouldn't be allowed access to those songs anymore.

Lala has raised a total of $35.1 million in funding since it launched back in 2007.  Investors include Bain Capital Ventures, Ignition Partners, and Warner Music Group.

Lala is a music collection for the way you live -- online.
Take your music and fuse it with a massive licensed catalog to easily play, buy and share on the web.

With Lala you can:
* Play over 6 million songs for free – no ads or clutter.
* Play your existing music collection from any computer for free.
* Discover music through friends and experts.
* Buy new music starting at 10 cents 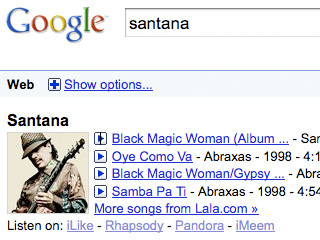