In December 2008, media publisher Nick Denton had a bid for Defamer, a Hollywood gossip site. But apparently that didn't work out. In another sign that the media business is a tough gig, this weekend, Defamer folded into Gawker, the company's flagship gossip title. Four-year-old Defamer will become an entertainment column manag

The lesson learned? "Scale matters -- both for marketing to readers and advertisers," Denton told Silicon Alley Insider. "The dream of micro-publishing is dead!"

Here's Denton's take on shutting the site down:

It's Oscars day, a good a time as any to do this: Hollywood gossip site Defamer is being merged into Gawker, the company's flagship gossip title. The four-year-old title will continue as Gawker's entertainment column; the movie-industry stories will remain showcased on Defamer.com but the sites will be staffed and managed as one.

Gawker now draws more than 3m visitors a month — four times the audience it had in 2007. More than three-quarters of Gawker's readership is from outside New York. The inclusion of Defamer's Hollywood gossip — following an expansion of political coverage last year and the incorporation of Valleywag — reflects Gawker's evolution into a national gossip site.

Here's Gawker's take on the news:

Like a waffling yard sale lady who, push come to shove, simply couldn't part with her prized collection of People "Sexiest Man Alives," Nick Denton has succumbed to a crippling case of seller's remorse.

As a result, Defamer is being absorbed into the company's power-crazed flagship title. Defamer posts will now appear under https://defamer.com/, while simultaneously feeding into the Gawker homepage.

Gawker's managing editor Gabriel Snyder, a former West Coaster who covered Hollywood for Variety and W, will oversee the transition. As for your trusty Defamer team, we've opted to explore new horizons. Stv, Kyle, the McCluskey Twins, and myself will be here through the remainder of the week. Watch this space for exciting announcements on what's to come. 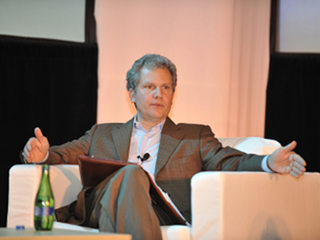