Just this week, corporate collaboration site, Yammer, raised $5 million from The Founders Fund and Charles River Ventures. Yammer launched in September 2008 as a spin-off of genealogy site Geni. I caught up with CEO David Sacks this week to ask him about where he plans on taking Yammer and how long he plans on staying at the helm of both Yammer and Geni.

Here's my interview (with modest edits).

BF: Congratulations on the funding. You have the same investors in both Yammer and Geni. And, Yammer was spun out from Geni. How much of Yammer do Geni shareholders own?

DS: All Geni shareholders got a share in Yammer. The way it works is that we did a pure 1-1 share spin-out from Geni. And then we raised several rounds for each one. The investor bases are roughly the same right now. Over time, the two companies will attract different investors.

BF: Which company will you remain CEO of, if you plan on stepping down from one of the posts during the next 18 months?

DS: It's a little too early to say. By the time we go out and raise another round, I'll have to make it clear by then. The board is comfortable with me splitting my time. New investors won't be comfortable with this. We won't need to raise money before then though. We hope to get the companies to profitability with this financing. We're comfortable with the current situation. It's certainly not ideal to be CEO of two companies.  But I would have been managing both products even if we didn't spin it [Yammer] out into its own entity.

BF: Can you give us some updated metrics?

DS: We haven't updated the numbers. But we’ve made significant progress since we signed on over 50,000 people in over 10,000 networks or businesses during the first month of launch, which was around Sep 2008.

BF: Has the business model changed from charging companies that claim their network?

BF: How many paying customers today?

DS: We haven’t released the numbers.

DS: Yes. We’re building a sales team to take advantage of the hot leads we have. We have large companies reaching out to us because they’ve heard about us or their employees are using the site. For large enterprise, it’s a sales-driven model combined with evangelism from the employees of the companies. We spend a lot of time talking to IT [professionals] at corporations. They want to know how we handle security.  The New York Times named us one of nine technologies that IT professionals should master in 2009. The product is only four months old. There's a lot of interest right now.

BF: What's the demographic of the members?

DS: It's all over the map. I don't have permission to release names of networks. We see major fortune 500 companies, and companies in tech space, and major consulting firms. We've seen a casino company and an entertainment company. There’s probably a technological weighting.  And, we have a lot of early adopters inside these companies.

BF: Who are the early adopters?

BF: How are people using Yammer?

DS: Well, they're pretty different. First of all, you can only get to your Yammer network if you have a Yammer address. It's like Facebook in the early days. If I work at IBM, I can participate in the IBM network, and only other people [with an IBM email] can participate. Right away, it's a directory of members. You can create groups in that network. Each group is like a private room, where you can communicate with people in that group. There is no 140-character limit. This is to interoperate with email.

BF: How does that work?

DS: It's interoperability with email, so I can receive all my Yammer messages via email. We also have clients for iPhone and Blackberry. If you get an update via email, you can reply to it via email. It's a feature that people are still discovering. I think it's one of the coolest features on the site. If you're comfortable with email and you don't want to use a new kind of social network, you can respond using email. When you create a "product" group or "engineering" group, that group will have an email alias like "engineering@yammer.com.” It's a totally private network. People have requested the ability to add contractors and consultants to their network. We've talked about incorporating that. We call that feature a guest pass. A network admin can invite somebody.  I should add that the networks are self-policing. Any member of a network can go to another member and request for them to verify or confirm their company email address.

BF: Why would a company want to claim a network?

DS: The network admin can manage users and content and delete messages. They also get to own the data.  One of the admin tools [coming soon] is directory integration. This allows employees to have a single sign-on.

DS: One of the concerns that has been raised is what if someone posts something inappropriate? There’s huge social pressure not to. This is clearly a work tool. There’s far greater risk in existing tools. I don’t think it’s that big an issue.

BF: Why would employees use this?

DS: It allows information to flow much more freely inside a company [a size of 30 employees to 3000]. Employees never feel like they have the information they need. Email is limited because people can be left off messages, or could be added to too many messages. Email doesn't scale that well.  Also the content gets lost in email. A lot of them have valuable information that employees can share. Yammer is about getting the conversation out of email where the information can get lost or trapped in email clients and moving it to a place where it can be organized, archived, searched and discovered.

BF: Do you have a Yammer app for LinkedIn?

DS: We'd be open to that. I'm not sure how to do that exactly. LinkedIn doesn't have an open platform. When you talk about a Yammer app, the question is what should it do on those sites? We plan to integrate Facebook Connect on Yammer, then you can invite people via Facebook Connect.

BF: How are you different from other companies that are similar, such as Present.ly and WizeHive?

DS: The Yammer clones? We're just way ahead of them. We have an iPhone app; Blackberry app. We have a firefox extension. We want people to access their Yammer network from any device. We used it internally at Geni for six months before we even launched. We're way ahead of them in terms of features, mindshare and financing.

DS: I think our model is a viral word-of-mouth model, where the employees find out about it and they invite others to join. We want to augment that with a professional sales team to target larger companies. And, for small to medium sized companies, we are working on ways to make it more viral.

BF: Thanks, David and good luck.

(Stay tuned for my next interview with Sacks, in which he talks about his plans for Geni) 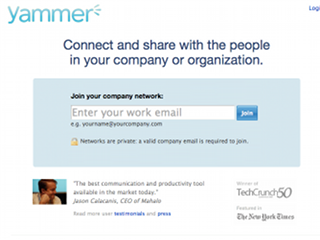